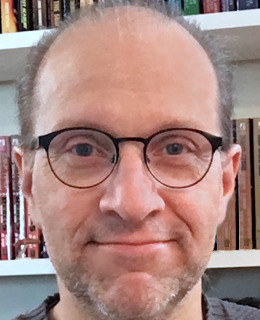 Scott Pearson has published humor, mystery, horror, urban fantasy, and science fiction. A lifelong Star Trek fan, Scott loves working on the franchise. He contributed short stories to Strange New Worlds and the Star Trek TNG twentieth anniversary anthology. His short novel Honor in the Night is in Myriad Universes: Shattered Light, and he wrote the eBook TOS novella The More Things Change. He has written for Star Trek Magazine, and for the last five years he has been the freelance copyeditor of the Trek novels from Pocket Books. He also contributes to the Star Trek Adventures role-playing game.

When Scott's not writing or editing, he and his daughter Ella cohost the Generations Geek podcast, available at www.chronicrift.com. Scott lives near(ish) the mighty Mississippi River, fabled in story and song, in personable St. Paul, Minnesota, with his wife, Sandra, and Ella (when she's home from college), plus Ripley the cat. Visit Scott online at scott-pearson.com and generationsgeek.com.