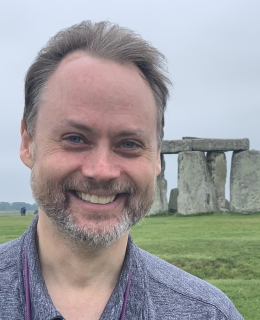 Rande Goodwin is a contributor to Crazy 8 Press' new anthology, The Fans Are Buried Tales, edited by Peter and Kathleen David.

A self-proclaimed sci-fi nerd and long-time Shore Leave attendee, Rande has written for and edited numerous fan publications, including Epicenter, the news magazine of EPIC: The Official Ethan Phillips International Fan Club, of which he was co-president.

An IT professional and aspiring writer in his free time, he lives in Connecticut with his wife, two daughters and four dogs.

The Fans Are Buried Tales is a new anthology of fandom-inspired adventures, told in the story-within-a-story style of Geoffrey Chaucer's The Canterbury Tales.