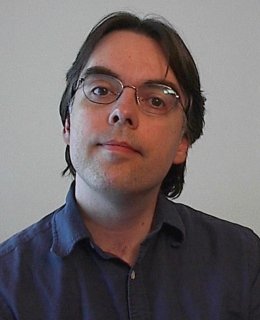 Christopher L. Bennett is a lifelong resident of Cincinnati, Ohio, with bachelor's degrees in physics and history from the University of Cincinnati. His love of science and science fiction was inspired by his discovery of Star Trek at the age of five. His first sales were a pair of original novelettes published in Analog Science Fiction and Fact, but since then he has established himself as a Star Trek author, whose critically acclaimed novels include Star Trek: Ex Machina (named by Star Trek (2009) screenwriters Roberto Orci and Alex Kurtzman as one of their four favorite ST novels), the Star Trek: The Next Generation novels The Buried Age and Greater Than the Sum, the Star Trek: Titan novels Orion's Hounds and Over a Torrent Sea, the Star Trek: Voyager short novel Places of Exile (in Star Trek: Myriad Universes: Infinity's Prism), the Star Trek: Department of Temporal Investigations series, and the Star Trek: Enterprise series Rise of the Federation. He has also written two Marvel Comics novels, X-Men: Watchers on the Walls and Spider-Man: Drowned in Thunder. His first original novel, Only Superhuman from Tor Books, was named the SF/Fantasy Debut of the Month for October 2012 by Library Journal.

Christopher is the only author to have stories in all four Star Trek anniversary anthologies: "...Loved I Not Honor More" in Star Trek: Deep Space Nine: Prophecy and Change, "Brief Candle" in Star Trek: Voyager: Distant Shores, "As Others See Us" in Star Trek: Constellations, and "Friends with the Sparrows" in Star Trek: The Next Generation: The Sky's the Limit. His short fiction can also be found in the collections Star Trek: Mirror Universe: Shards and Shadows, Star Trek Corps of Engineers: Aftermath, and Star Trek: Mere Anarchy. He has had original short fiction published in Analog Science Fiction and Fact and the online magazines DayBreak Magazine, Alternative Coordinates, and BuzzyMag, and has contributed numerous articles to Star Trek Magazine. His short story collection Hub Space: Tales from the Greater Galaxy is available electronically from Mystique Press.

His new short fiction collection Among the Wild Cybers: Tales Beyond the Superhuman, containing an all-new prequel adventure to Only Superhuman, is debuting at this year's Shore Leave.

Christopher's homepage, fiction annotations, and blog can be found at christopherlbennett.wordpress.com, and his Facebook author page is at www.facebook.com/ChristopherLBennettAuthor.