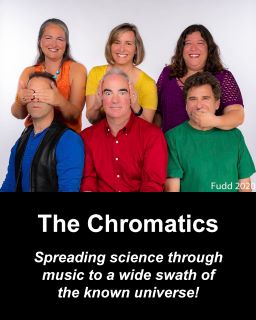 The Chromatics is a high-energy vocal band on a mission to delight audiences with a full spectrum of songs about science, technology, life, and their intersections. They have taken their astronomically-correct a cappella songs, a project called AstroCappella, from Palm Springs to Orlando and from Las Vegas to New York, and their CD has flown in space (no kidding!). Back down on earth they have captivated young and old alike at the Kennedy Center's Millennium Stage, the National Air & Space Museum, the Mid-Atlantic Harmony Sweepstakes, and numerous science fiction conventions, First Nights, festivals, concert series, and private parties. Their CDs have been nominated for multiple Washington Area Music Awards (WAMMIES) and Contemporary A Cappella Recording Awards (CARAs). After more than 20 years together they are a mainstay of the local music scene and still bring a youthful exuberance to their fun-filled, colorful, and scientifically accurate performances. In spectral order, the Chromatics are Alan Smale (red), Padi Boyd (orange), Karen Smale (yellow), John Meyer (green), Scott Rohrbach (blue), and Michelle Orhan (purple). Find them on the Web at www.thechromatics.com and on Facebook/TheChromatics.

On Friday night The Chromatics will present the latest on the James Webb Space Telescope in both visual and musical form. This is a performance not to be missed.