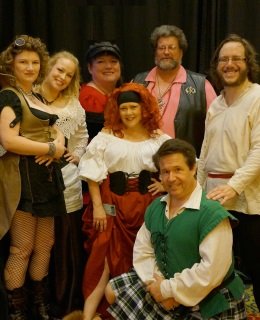 Once upon a time far, far away... Actually, it was in 1982 in the vicinity of Baltimore, Maryland that five young people (well, they were young then) appeared on stage at Shore Leave 4, warbled a few a capella songs, and launched themselves on a path that would forever affect their lives. Now more than 20 years and nearly 200 songs later, they're still at it.

What's so special about the Knights? How did they come to be? Why do they insist on keeping a name that went out with leisure suits and curly perms? And what's with the kazoos?

The Boogie Knights came into being during a period where everyone they knew of as filkers were doing songs about Star Trek, Star Wars, and other high profile science-fictiony things. Where were the tales of daring-do? Where were the stories of brave but less-than-intelligent knights, vulnerable damsels with a mean right hook, frightened livestock, and war for the sake of just kicking some serious butt? Where were the songs about mysterious creatures, old beggars who speak in riddles, paisley-clad wizards, confused cutpurses, and magic spells gone awry? Where werer the psalms to gods long-forgotten, or at least temporarily displaced? And most importantly where was the top-40 music?

Into this void, stepped the Boogie Knights...