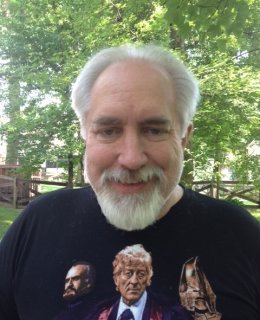 Richard C. White is a science fiction/fantasy author, but he has also been known to do dark fantasy, new pulp, fantasy noir, and even non-fiction. His latest release is Chasing Danger: The Case Files of Theron Chase, which was released in April 2019. Other recent releases were Harbinger of Darkness, For a Few Gold Pieces More, the short story "Dangerous Memories" in The New Adventures of Rocky Jordan, and Terra Incognito. He's appeared in various anthologies, such as Monsters, Robots, and Space for the Origins Game Fair, as well as Liberty Girl: Fight for Freedom, All for One: Tales of the Musketeers, and Charles Boeckman Presents: Johnny Nickle. He's also written the novella, The Dark Leopard.

As a media tie-in writer, he's written for the Star Trek, Doctor Who, Battletech and The Incredible Hulk frachises. His novel, Gauntlet Dark Legacy: Paths of Evil, was the best-selling tie-in for his publisher that year. His latest tie-in works are In the Shadows and Storm Wreck for Green Ronin.

Richard is a member of the Science Fiction and Fantasy Writers of America and the International Association of Media Tie-in Writers. Additionally, Richard serves on the SFWA Writer Beware committee.