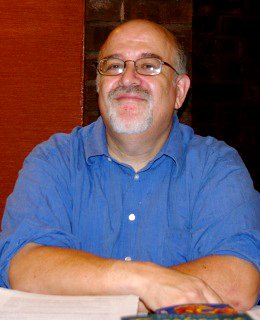 Peter David is a prolific author whose career, and continued popularity, spans nearly two decades. He has worked in every conceivable medium: television, film, books (fiction, non-fiction, and audio), short stories, and comic books, and acquired followings in all of them.

In the literary field, Peter has had over forty novels published, including numerous appearances on the New York Times Bestseller List. Publisher's Weekly described him as "a genuine and veteran master." Probably his greatest fame comes from the high profile realm of Star Trek novels, where he is the most popular writer of the series, with his title Imzadi being one of the bestselling Star Trek novels of all time. He is also co-creator and author of the bestselling New Frontier series for Pocket Books. A partial list of his titles include Q-Squared, The Siege, Q-in-Law, Vendetta, I, Q (with John DeLancie), and A Rock and a Hard Place, plus such original science fiction and fantasy works as Knight Life, Howling Mad, and the Psi-Man adventure novels. He also produced the three Babylon 5 Centauri Prime novels. He has also had short stories appear in such collections as Shock Rock, Shock Rock II, and Otherwere, as well as Isaac Asimov's Science Fiction Magazine and the Magazine of Fantasy and Science Fiction.

Peter has written more comics than can possibly be listed here, remaining consistently one of the most acclaimed writers in the field. His resume includes an award-winning twelve-year run on The Incredible Hulk. He has also worked on such varied and popular titles as Supergirl, Young Justice, Soulsearchers and Company, Aquaman, Spider-Man, Spider-Man 2099, X-Factor, Star Trek, Wolverine, The Phantom, Sachs & Violence, and many others. He has also written comic book related novels, such as The Hulk: What Savage Beast, and co-edited The Ultimiate Hulk short story collection. Furthermore, his opinion column But I Digress has been running in the industry trade newspaper The Comics Buyers Guide for nearly a decade, and in that time has been the paper's consistently most popular feature, which was also collected into a trade paperback edition.

Peter is the co-creator, with popular science fiction icon Bill Mumy (of Lost in Space and Babylon 5 fame) of the Cable Ace Award-nominated science fiction series Space Cases, which ran for two seasons on Nickelodeon. He has also written several scripts for the Hugo Award-winning TV series Babylon 5, and the sequel series, Crusade, as well as the animated series Roswell. He has also written several films for Full Moon Entertainment and co-produced two of them, including two installments in the popular Trancers series as well as the science fiction western spoof Oblivion, which won the Gold Award at the 1994 Houston International Film Festival for best Theatrical Feature Film, Fantasy/Horror Category.

Peter's awards and citations span not only an assortment of fields, but the globe. They include: the Haxtur Award 1996 (Spain), Best Comic Script; OZCon 1995 award (Australia), Favorite International Writer; Comics Buyers Guide 1995 Fan Awards, Favorite Writer; Wizard Fan Award Winner 1993; Golden Duck Award for Young Adult Series (Starfleet Academy), 1994; UK Comic Art Award, 1993; Will Eisner Comic Industry Award, 1993. Recently, his work was again nominated in two categories for the Eisners. In the 1999 SFX Readers Award he was the sixth most popular author in the field, with four of his books finishing in the top ten in their category ("The Peter David Midas touch continues," wrote the SFX editors.)

He is also a founding member of Crazy 8 Press, the internet publishing venture launched at Shore Leave 33.

Books by Peter A David: