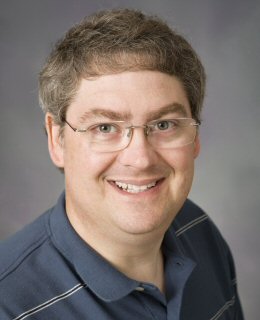 Kevin Dilmore has found ways to turn geek into cash for more than a decade.

It all started in 1998 with his eight-year run as a contributing writer to Star Trek Communicator, for which he wrote news stories and personality profiles for the bimonthly publication of the Official Star Trek Fan Club. Since that time, he also has contributed to publications including Amazing Stories, Hallmark and Star Trek magazines.

Then he teamed with writing partner and heterosexual life mate Dayton Ward on Interphase, their first installment of the Star Trek: S.C.E. series in 2001. Since then, the pair has put more than 1 million words into print together. Among their most recent shared publications are the novella "Things Fall Apart" in Star Trek: Mere Anarchy (March 2009), the short story "Ill Winds" in the Star Trek: Shards and Shadows anthology (January 2009) and Wet Work, a novel based on the television series The 4400 (October 2008).

By day, Kevin works as a senior writer for Hallmark Cards in Kansas City, Mo., doing about everything but writing greeting cards, including helping to design Star Trek-themed Keepsake Ornaments. His first children's book, Superdad and His Daring Dadventures with illustrations by Tom Patrick were published by Hallmark Gift Books in 2009.

A graduate of the University of Kansas, Kevin lives in Overland Park, Kansas. Keep up with his shameful behavior and latest projects on Facebook and Twitter.