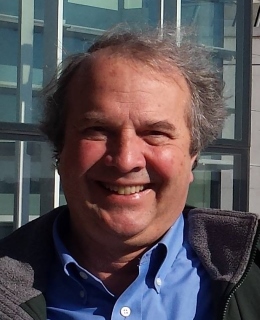 Kenneth will be speaking about:

Dr. Kenneth Carpenter is currently the Hubble Space Telescope (HST) Operations Project Scientist and the Ground Systems Project Scientist for the Wide-Field Infrared Survey Telescope (WFIRST) and is a member of the "Exoplanets and Stellar Astrophysics Laboratory" at NASA's Goddard Space Flight Center in Greenbelt, MD. He enjoys photography and is an enthusiastic fan of exploration of the Universe in which we live, the Maryland RenFest, and all things Trek and Disney. Carpenter credits both Star Trek and the 1964-'65 New York World's Fair, which he attended as a child, with fueling his desire to work for NASA. He has been a speaker at various Star Trek and media cons, including Atlanta's DragonCon, Denver's StarFest and Maryland's Shore Leave.

Dr. Carpenter will talk about "Exploring Space Through Photography"
Dr. Kenneth Carpenter will take us on a voyage of discovery to explore how color photos are obtained by our robotic emissaries to the planets in our solar system and out into the depths of space.  He will use missions to Mars, in particular the ongoing Perseverance rover and its helicopter, and the Hubble Space Telescope, as iconic examples of missions that 1) actually visit their targets and 2) remotely observe the wonders of our Universe.  He will close with some photos and videos from these missions and observations of the cultural impact they have had on society.