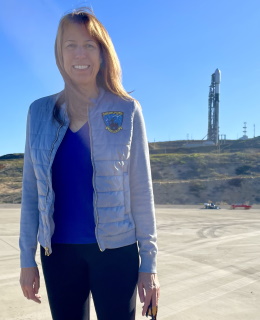 Kelly will be speaking about:

Kelly Fast is the Near-Earth Object Observations Program Manager for NASA's Planetary Defense Coordination Office. She earned her B.S. in Astrophysics from UCLA and her M.S. and Ph.D. in Astronomy from the University of Maryland. She investigated ozone and atmospheric chemistry on Mars, winds on Titan, and the effects on Jupiter's stratosphere of small body impacts as an astronomer at NASA's Goddard Space Flight Center before coming to NASA Headquarters in 2011. Previously a visiting astronomer at NASA's Infrared Telescope Facility (IRTF) on Maunakea, she is also now the IRTF Program Scientist. Dr. Fast previously served as Program Scientist for the MAVEN mission to Mars and she led NASA’s Solar System Observations, Planetary Astronomy and Planetary Atmospheres research programs. Her childhood passion for Star Trek and Space:1999 led to a lifelong passion for space.