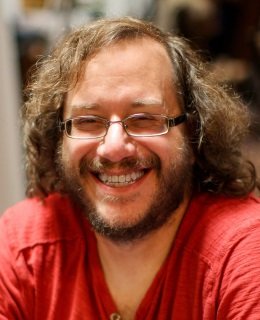 The first time Keith R.A. DeCandido attended Shore Leave, it was 1992. He came as a member of the press as part of the public-access TV shows The Chronic Rift and Word Balloons: Interviews with Comics Folk, in which capacity he conducted interviews with authors Michael Jan Friedman, Howard Weinstein, Diane Duane, Peter Morwood, and L.A. Graf, as well as actors Mark Lenard and Majel Barrett. He came back to Shore Leave in 2000 as a newly minted Star Trek author, having written the comic Perchance to Dream the year before and the Starfleet Corps of Engineers eBook novella Fatal Error that year, with his first Trek novel, Diplomatic Implausibility, due out the following year. He's been to every Shore Leave since (both real and virtual), having written almost sixty novels, more than seventy-five short stories, a mess of comic books, and more nonfiction than he can possibly count.

Recent and upcoming work includes the Resident Evil: Infinite Darkness comic book The Beginning, the prequel to the Netflix animated series; the Star Trek Adventures role-playing game adventure Incident at Kraav III (with Fred Love); Phoenix Precinct, the latest in his fantasy/police procedural series; Feat of Clay, the second in his urban fantasy series about a nice Jewish boy from the Bronx who hunts monsters; the Systema Paradoxa novella All-the-Way House; the serial killer thriller Animal (with Dr. Munish K. Batra); the award-winning graphic novel adaptation of Gregory A. Wilson's Icarus; contributions to each of the shared-world superhero anthologies in the Phenomenons series, created and edited by Michael Jan Friedman; and short stories in the anthologies Devilish and Divine, The Fans are Buried Tales, The Further Adventures of Grignr, Ludlow Charington's Doghouse, Tales of Capes and Cowls, Three Time Travelers Walk Into..., Turning the Tied, and Zorro's Exploits. In 2009, he was given a Lifetime Achievement Award by the International Association of Media Tie-in Writers, which means he never needs to achieve anything ever again.

His rewatches of various classic Trek TV shows and reviews of current Trek TV shows appear on the award-winning webzine Tor.com, along with other pop-culture prognostications about a variety of topics, particularly screen adaptations of superhero comics. His other nonfiction on pop culture can be found on his Patreon (patreon.com/krad), as well as anthologies in the Outside In, Subterranean Blue Grotto Guide, and Smart Pop series. He's also a professional musician (currently the percussionist for Shore Leave regulars the Boogie Knights), an editor of more than 25 years' standing (working for clients both corporate and private), a fourth-degree black belt in karate (which he teaches to both children and adults), and probably some other stuff that he can't remember due to the lack of sleep. Find out less at DeCandido.net.