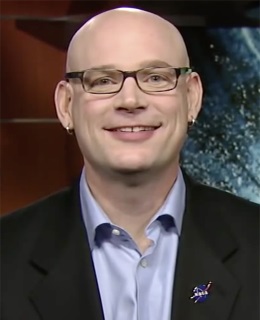 C. Alex will be speaking about:

Dr. Young is a NASA solar astrophysicist studying space weather in our solar system and beyond. He led NASA national education and outreach activities for the August 2017 total solar eclipse. He is the Associate Director for Science in the Heliophysics Science Division at NASA's Goddard Space Flight Center and the head of the NASA Space Science Education Consortium. In this role, he is responsible for overseeing and coordinating education and public outreach in the Goddard Heliophyiscs Science Division as well as for the Heliophysics Division at NASA Headquarters. He works with the education and outreach teams as a liaison with the NASA offices of Education and Communication. In addition, he works with the division scientists to promote and support their research. Dr. Young served as SOHO and STEREO senior support scientists as well as a Hinode Chief Observer before becoming an Associate Director. His research background includes high energy astrophysics, astrostatistics, and data analytics.

This year Dr Young will talk about "The Science of Space."

You might be surprised to know that space is not empty. We often hear in school that space is a vacuum. Actually, nature abhors a vacuum. And it is even more complicated and exciting than that. In fact, we live in the extended atmosphere of a star, our Sun. The atmosphere, which is full of energy and matter, interacts with everything in the solar system filling space. It interacts with other planets, comets, asteroids, astronauts and the very spacecraft we use to study it. It creates a dynamic and often dangerous environment, a non-empty space, that NASA and its partners want to understand and explore. Let's explore this together and take a peek at the new final frontier.