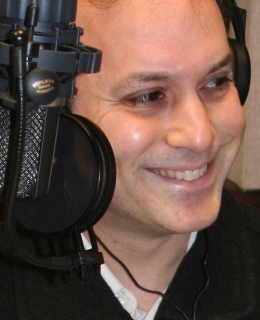 Andrew Hiller attempted to travel the road least taken only to fall off. Caught in wild currents, he surfaced to find his commentaries selected four times as best of the year on Washington's NPR station WAMU 88.5 FM, a pair of his plays fill the New York City stage, and an opportunity to act and write with the original Muppets gang in his Cobblestone Documentary series. His first fantasy novel, A Climbing Stock, grew to be an Amazon humor best seller. Between projects, he has taught art in a psychiatric ward, hosted an internationally broadcast science, health, and tech radio program, and reads everything that makes him go "Huh?" or "Ha!" His second novel, A Halo of Mushrooms was released in December 2015.

Andrew is currently working on a new YA fantasy novel as well as hosting Xistance: Moments in Time where he has recently interviewed Star Wars' John Boyega, Stan Lee, and the CW's Cress Williams (Black Lightning). When not writing, editing, or producing you can often find him in front of a canvas. A sampling of his radio, visual and literary work can be found at www.andrewhiller.net